What did the parts of London where the aristocracy lived look like in the Regency Era?

In my books, I don’t often describe the outside of the homes of my characters much, when it is their London houses (the country houses usually get more description). But having recently been in London, I thought I’d talk about that today.  We tend to think of the houses of very wealthy people as being
separate houses – large things, with extensive gardens around them. But that
was not the case, mostly, in Regency London.

There were large estates on the outskirts of London (in areas that are now regarded as almost in the heart of the city….) but most of the houses in the Mayfair area, where the bulk of the aristocracy lived, were what can be called ‘row houses’ – they had adjoining walls, mostly, and every so often, there might be a tiny gap between two houses. Each house was four to five stories above ground, and a semi below ground basement level, with another level of cellars below that.

The streets were laid out such that there were open squares, in which there were fenced gardens, and houses surrounded those on all four sides. Behind the houses there would be a lane, which gave rear access to each house, and was where stables were located (sometimes called mews). Each house might also have a private garden area behind it, separating it from the laneway.  Some examples of this sort of structure still exist in London today. 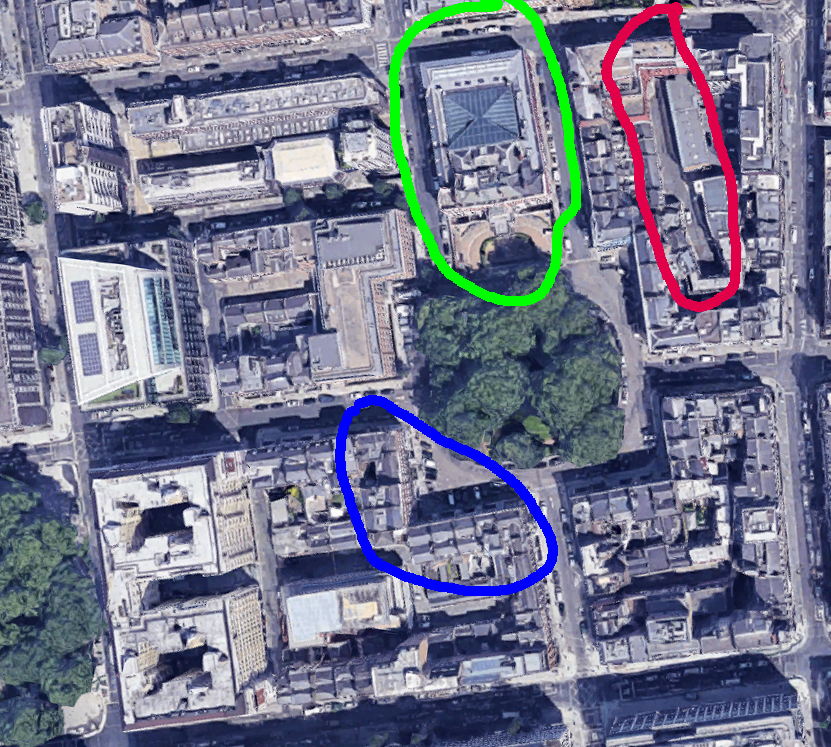 This is the Google maps satellite view of Manchester Square.  The area circled in red is a mews / laneway in the middle of a block (likely accessed via an archway under part of a building. This is still named a mews today.  The area circled in green is a single stately home (its enormous) which is a museum today, and is beautifully preserved. (we will talk about that, with pictures, in the next newsletter) The area circled in blue shows tall ‘row house’ type homes, and you can still see the laneways and private gardens behind them – whilst other areas of the square show evidence of original buildings having been replaced by more modern blocky buildings, this area is a good indicator of what the homes might have looked like.  Have aplay with this on Google maps yourself, and use street view to see those buildings from ground level, to get an idea of their size.

The servants entrance was either through the back lane, or by a separate set of stairs which went down to the basement level from the street, through a gate in the fence near the steps to the main entrance.  In the picture below, which is from Google street view, you can see the top of a window of the basement level, through the fence, just above where I have drawn a red arrow. There was a gap between the footpath and the house, to allow the stairs going down, and to let some natural light into the windows of the servants basement level.

So all of the windows of the upper floors looked out onto the fenced garden in the centre of the square. The fenced gardens were often locked, and only the residents of the street had keys.  Manchester Square is still like that today.

So – there you are – now, when I talk about the characters going into their London townhomes, or looking out of their windows there, you have a picture of what it might look like (less the modern cars etc that you see above, of course!).