You’ve probably all heard the term ‘The Industrial Revolution’ at some point in your life, but you may not realise just how much of that revolution was happening in Regency times.

The Industrial revolution was a period when much manufacturing which had previously been done in homes, as ‘cottage industry’ began to move into more factory style bulk production.  This happened for a number of reasons.

1.   Over the century of the 1700s, there had been many small inventions,
especially in the cotton production and weaving industries, each of which
greatly enhanced the productivity possible from a single worker.
2.   The Napoleonic wars, like any war, required a great deal of supplies to keep soldiers in the field – not just food, but uniforms, weapons and ammunition.  The protracted series of wars (from 1790 to 1815) drove innovation in manufacturing, both because merchants wanted to profit from being a supplier to the military, and because so many young men had gone to war that efficiencies were needed to get anything made, as there just were not enough workers in some areas.
3.   The appetite of the English aristocracy for high quality and exotic goods, for conspicuous display of wealth, drove merchants to look for new and more effective ways to provide what they wanted to buy – from new types of fabric, produced in the new weaving factories, to other items which had become more scarce as the wars affected the ease of trade.
4.    The increasingly innovative use of steam engines (to drive things like factory machines, as well as the trains for the railroads which were starting to be built) provided a more economic method of creating rapid production, and the railways began to make fast distribution of goods possible.

Put all of that together, and you have a recipe for rapid change.  Change that brought good things and bad. Machinery allowed the manufacture of much more high quality cloth, and more complex patterned cloth, using the new Jacquard weaving looms, and for many new items, such as machine produced greeting cards. But machinery in factories was a new thing – a thing that could be very dangerous to workers, in an era where there were no laws protecting those workers (It was more than a century later, before the idea of Occupational Health and Safety was invented….).  In the weaving shops, small children were often employed because they could get under machines, and get their hands into tiny spaces to untangle things – many were crippled or killed when machines broke or trapped them. 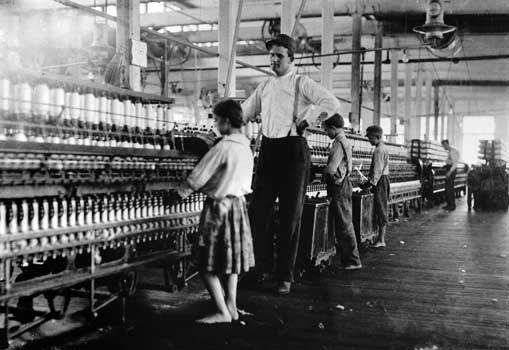 The advent of machine tools also allowed greater standardisation in production of items – which made things cheaper – what had previously been handcrafted and only available to the rich, could now be bought by the lower and middle classes.  The change in standard of living this created was the beginning of a great destabilisation of the distribution of wealth, and the sense of ‘knowing your place in the class system’ of the world.

Until our Regency period, it was a world where almost every item was made by hand, was unique, and not quite the same as the next one, and took much time to make.  Imagine how different such a world was!  And how exciting, and terrifying, the rate of change must have seemed, when machines began to be possible, and mass production came into existence.