Today, the first thing that comes to mind when asked “What’s paper made from?” is ‘Trees’ or ‘Wood’. People assume automatically that paper is made from wood, that paper and wood are synonymous.

But in fact, paper has been made from wood only since the mid-1800s; until
the 1850s, paper was made from recycled linen and cotton rags. In England
before the mid 1600s, in most cases, the only ‘paper’ available was parchment
or vellum – parchment is the skin of a sheep or goat that’s been prepared
for writing; vellum is a fine parchment made from the skins of calves, lambs
or kids. It was, as a result, very expensive, and in limited supply.

Once the idea of making paper from linen, cotton, hemp and similar fibres really took hold (it was introduced to Europe around 1000 from China, by way of the Arab nations), it spread slowly. Rag based paper existed in England from around the 1300s, but the scale of production was small. By the mid 1700s, the demand had risen so much that rags were worth a great deal of money, and there were laws in parts of Europe forbidding trade in rags outside national boundaries (so, of course, people smuggled them).

The demand drove change. Throughout the eighteenth century, there was an intense search in Europe and the U.S. for a new fiber source of paper. Contests were held, universities offered prizes, and inventors and laboratories worked feverishly to come up with a new source for paper. Inventors would often print a book on their newly-invented paper that described how the paper was made. And so we ended up with books printed on paper made from asbestos, straw, swamp grass, marsh mallow, and esparto dune grass from certain beaches in Spain.

In the early 1800s the crisis in demand for rags was made worse by the progressive invention of better printing presses, and the rising demand for books from the wealthy classes. The first patent for a paper using deinked waste paper as part of its fiber source was issued in 1800 in London. It was not until the 1840s that the initial development of the papermaking machine in England and experiments in ground wood pulping in Germany and Nova Scotia enabled the commercial production of paper, which used wood fibre as part of its composition.

So – when your read about books in Regency stories, or about characters pulling out a sheet of paper to write on, those books and writing papers are made of rag fibre, and are very expensive. No-one wasted paper, unless they were unbelievably wealthy. This is also why letters of the time were often ‘crossed’ – (see image above) where the writing was written on the page in one direction, and then the paper was turned 90 degrees and the person continued writing in lines which ‘crossed’ the first loot of writing – all to save paper. Which made it remarkably hard to read what your correspondent had to say! (and has made it extraordinarily difficult for historians to transcribe the letters of historical figures, even when they are well preserved.

So next time you scrunch up a sheet of paper in frustration, throw it away, and start again, consider that, in the Regency era, you would have been throwing away what could amount to a month’s wages for a poor person!

Books in the Regency Era

Today, books are everywhere, in one form or another.  But in the Regency era, most people could not afford books.  The nobility could, but even they rarely had what we would call a  large collection today. To have a few hundred books was
remarkable, and worth quite a fortune.

Books were laboriously printed, where every single letter was a tiny piece of
lead type, that had to be hand laid into a frame, to print the pages.   One
consequence of this was that books were often first published in a serialized
fashion, so that they could be released faster.  The paper that they used was
also thicker than today’s paper, as the processes for making it had not yet
evolved to achieve the effortless quality of thin paper that is made now.  So – a
longer book was much fatter.

To make the process of printing easier for the printers, rather than print one page at a time, multiple pages were printed on one huge sheet, (which was printed both sides, to a very cleverly planned pattern, so that all of the pages ended up in the right order after folding) and the result was folded in a specific way down to the individual page size.  Each bundle of pages was stitched down the fold that aligned with the spine of the book. (which is where the process that some note books are still made by today came from).  This meant that, when the book was assembled (each bundle stacked on the others in the right order, and the whole stitched together across the width of the spine), either a top of bottom edge, or the opening long side of the book had many instances where the pages were still joined together, by a fold (which side these ‘unopened/ uncut pages were depended on the fold pattern used). 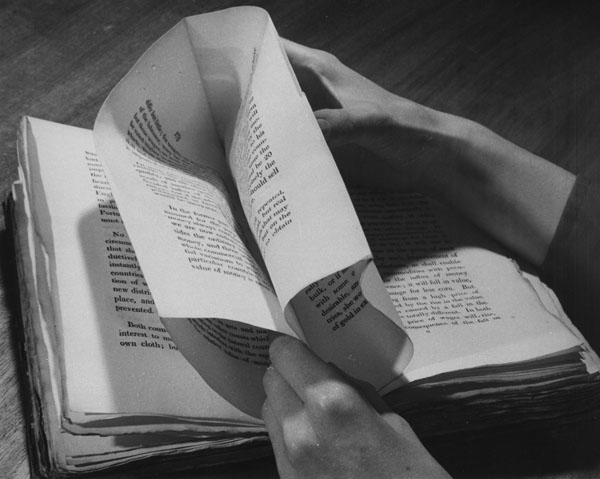 To be able to read the book, you needed to take a sharp flat paper knife, and slice along the fold to separate the pages (see picture above to understand what this looks like. The book in the picture has closed folds at both the right hand side of pages and the top of pages.So, when you see a very old book, with rough and a little uneven edges, it is likely because whoever cut the pages did so not so evenly or smoothly.  Books were also often first sold to a buyer with their pages rough edged, most uncut, and in a temporary light cloth binding.  The buyer then took the book to a binding specialist, to get a good quality leather binding in the color and texture of their choice made, and the pages bound into it.

So… next time you read a paper book, imagine being there in the Regency Era, and having to keep slicing the pages apart, the first time that you read a book, just so that you could turn the page!